Is there a socio-economic gap in students’ academic match?

Young people from less well-off backgrounds are more likely to pursue lower ranked upper-secondary qualifications than their prior attainment would suggest that they can achieve.

Recent research from Konstantina Maragkou (University of Sheffield and CVER) examines whether socio-economic inequalities exist in the academic match of students in upper-secondary education.  Academic match occurs when student quality matches the quality of the qualification that they take, i.e. students are taking appropriate qualifications for their capabilities and prior attainment. The study uncovers a signiﬁcant socio-economic gap in academic match among English students in upper-secondary post-compulsory education. Students from lower socio-economic backgrounds achieve less highly ranked qualiﬁcations compared to their similarly attaining but more advantaged peers. We show that this is associated with a wage penalty in the labour market.

This study makes use of detailed individual-level linked administrative data (‘Longitudinal Educational Outcomes’ data) from schools, colleges and tax authorities in England for a single cohort of students who undertook their GCSE exams in 2006. Academic match is measured using a continuous variable defining undermatched, matched and overmatched students based on the distance between each student’s prior attainment in GCSE exams and the median prior GCSE attainment of the other students who achieved the same chosen academic or vocational qualification in upper-secondary education. The students who follow upper-secondary qualifications that are studied by similarly achieving peers are then considered as matched to their qualification.  The outcome of this analysis shows that students from socially disadvantaged backgrounds are more likely to be exposed to academic undermatch (that is, having higher prior attainment than the median on their chosen upper-secondary course), even compared to others within the same school.

The study considers students’ match in Level 1 to Level 3 vocational qualifications and Level 3 academic qualifications (A-levels and AS levels) taken in upper-secondary education between ages 16 and 19. Previous literature on rates of return has shown a positive average income return to qualiﬁcations at Level 3, whether vocational or academic. However, with regard to the students who leave the education system with lower level qualiﬁcations, there is more controversy over the extent to which these qualiﬁcations oﬀer good opportunities for future employment and earnings. Qualification choice is therefore important with potentially long-lasting consequences.

Figure 1: Measure of qualification’s quality based on median standardised GCSE scores of students achieving that qualification 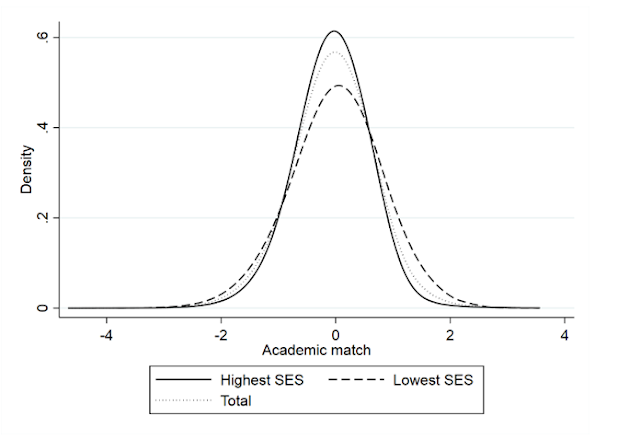 When keeping important background factors constant, including prior attainment at ages 11 and 14, demographic characteristics and secondary school attended, students from socially disadvantaged backgrounds are still more likely to be exposed to academic undermatch compared to their more advantaged peers. This gap is greater among the highest achieving students. This means that, compared to other young people from a more advantaged background with the same level of prior attainment and the same other background characteristics, those from a less well-off background are more likely to study for lower-ranked qualifications in upper-secondary education. Also, undermatched students are more likely to be found in schools with lower proportions of high achieving students and higher proportions of disadvantaged students, suggesting the importance of peer groups and school guidance on qualification choices. Among the highest achieving students, 80% of the identified socio-economic gap on academic match could be explained by such differences in the schools that those students from differing backgrounds had attended.

In addition, the study shows that a significant proportion of undermatched students are likely to be found in rural districts with higher rates of youth unemployment and higher proportions of residents with only low-level qualifications.

Does being undermatched matter?  The study also estimates wage equations with the indicators of whether young people are matched or not to their upper-secondary qualification. The results show that there is a positive relationship between being academically matched and labour market income returns. Non-university participating girls who are one standard deviation less undermatched earn 17% more at age 25 while non-university participating boys earn 5% more.

In summary, the study shows that there is a signiﬁcant socio-economic gap in academic match among English students in upper-secondary post-compulsory education. Students from lower socio-economic backgrounds achieved less highly ranked qualiﬁcations compared to their similarly attaining but more advantaged peers. We show that this matters for labour market outcomes. Policy-makers should be focusing more on providing students with information related to the available upper-secondary courses that are suitable to each student’s ability credentials and future educational and occupational aspirations.

Posted by CVER Admin at 11:18
Email ThisBlogThis!Share to TwitterShare to FacebookShare to Pinterest