Which skill signals matter truly in getting a job?

Individuals make costly investments (in terms of time, effort or money) to signal skills to potential employers, such as getting good grades in school or college or learning a foreign language. However, there is little understanding on which skill investments will pay off in finding employment upon entering the labour market. Labour market entrants use skill signals to convey productivity to future employers as these cannot directly observe applicants’ skills in the first stage of the hiring process (i.e. written applications including CVs). While there is a well-known relationship between cognitive or non-cognitive skills and individual labour market outcomes, the role of skill signals themselves is less well established. Analysing and isolating the effect of how skill signals such as grade-point-averages (GPA) affect labour market outcomes is difficult for at least two reasons: First, different types of skills are usually correlated, i.e. a smart person with a high GPA usually also has other good skills. Second, we do not know from observational data, to which extend a potential employer really observes skill signals.

In a new paper with Marc Piopiunik, Guido Schwerdt and Ludger Woessmann, we conduct an experiment with a representative sample of nearly 600 human resource managers to analyse the effects on employment of skill signals within three domains: cognitive skills, social skills and maturity. In an online survey, our participants are asked to choose between two CVs, which appear side-by-side on the screen: “Which applicant would you rather invite for a job interview at your firm?” The (fictitious) CVs have randomly assigned skill signals, which allow estimating the causal effect of each skill on being invited for an interview. The choice experiment mimics the first stage of an application process, in which human resource managers review written applications and decide who to invite for an interview. We look at two distinct groups of labour market entrants for whom relevant skills, requirements and expectations vary: secondary-school graduates applying for an apprenticeship and university graduates with a BA in Business. Cognitive skills are signalled through the (school or university) GPA, IT and foreign language skills. Social skills are signalled through social volunteering and playing team sports. Maturity is signalled through age, long internships and the high-school GPA in case of university graduates. The experiment was followed by a short survey on HR manager characteristics and hiring preferences.

We find that skill signals in all three domains – cognitive skills, social skills, and maturity – affect the probability of being invited for a job interview. The figure below shows point estimates and confidence intervals for all signals for both labour market entrant groups. GPAs prove important for all, with a stronger effect for university graduates than for secondary-school graduates. IT and language skills are particularly relevant for females. Social skills are highly relevant for both genders and particularly important for secondary-school graduates entering the labour market at a young age. Maturity is particularly relevant for males, especially for secondary-school graduates. These heterogeneities by labour market entry age and gender are consistent with varying relevance, expectedness, and credibility of the different skill signals in different contexts. 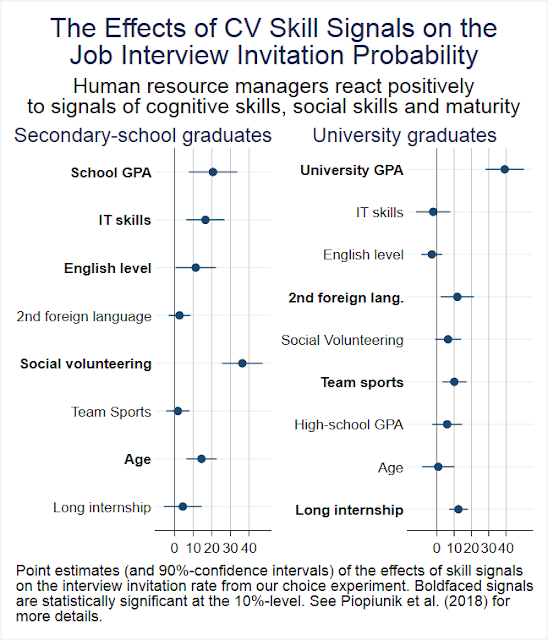 We also find heterogeneities with respect to HR managers’ personal characteristics. For secondary-school graduates applying for an apprentice position, managing directors and older HR managers put less weight on school GPAs, but instead more weight on IT skills, social volunteering, and experience through internships. Among college graduates, HR managers in large firms value college GPAs more, possibly due to a more standardized procedure of applicant selection. Furthermore, we find that the self-reported hiring priorities of HR managers are consistent with their decisions in the choice experiments, confirming the intended information value of the skill signals.

Our study reveals important aspects about how signals of skills are processed and utilized in the labour market. Gender differences in the effects of language skills, IT skills, and maturity are generally in line with gender stereotyping. Social skills are most effectively signalled by social volunteering among secondary-school graduates but by engaging in team sports among college graduates, possibly reflecting limited credibility of volunteering activities of older individuals who may behave strategically.

Our results also suggest that skill signals with straightforward verifiability in real hiring situations, such as GPAs, internships, and age, tend to have higher returns than skills that are more costly to verify, such as language or team sports, in particular at large firms. In terms of policy implications, our paper stands in contrast to a vast literature that deals with discrimination on the labour market due to innate characteristics such as race or gender. Our study shows which skill signals that can be changed and acquired through investments of effort, time or money, impact hiring decisions.