As work changes, firm-provided training may become more relevant for good economic and social outcomes. However, so far there is little or no causal evidence about the effects of training on firms. Pedro Martins looks at the effects of a training grants programme in Portuguese firms.

As most academics, I am fortunate to be able to update my own skills on a regular basis. For instance, when I attend a research seminar, I learn from colleagues that are pushing the knowledge frontier in their specific fields. Some of their insights will sooner or later also feature in my own teaching and research, thus increasing my performance and that of my institution.

However, workers from other sectors typically have far fewer opportunities to increase their skills on a regular basis. Recent research by the European Investment Bank indicates that, on average, workers in Europe spend less than 0.5% of their working time on training activities. In the current context of major changes in labour markets – including artificial intelligence and automation and perhaps even coronavirus – this training figure seems too low.

Economics has long predicted some degree of under-provision of training in labour markets. First, training is expensive for firms, as it typically entails significant direct and indirect costs. Second, employers know they will lose their investments in training if employees subsequently leave. It will be even worse if workers are poached by competitors. Moreover, even leaving aside the issues above, firms may struggle to estimate the effects of training on their performance (sales, profits, etc), which will again detract them from upskilling their workers.

The context above points to an important market failure in training. This context may also explain in part the disappointing economic performance of many European countries over the last years. While labour markets have become more efficient, incentives for on-the-job training may paradoxically have declined, as workers move more easily to other firms. However, public policy may play a role in alleviating the under-provision of training. Specifically, governments can subsidise training in the workplace in order to bring its private net benefit more in line to its social value.

The new working paper featured in this blog and recently presented at a CVER seminar (‘Employee training and firm performance: Quasi-experimental evidence from the European Social Fund’) contributes empirical evidence to this question. The research evaluates the effects of a €200-million training grants scheme supported by the European Union on different dimensions of recipient firms.


The study draws on the difference-in-differences counterfactual evaluation methodology, comparing the outcomes of about 3,500 firms that applied and received a training grant (of about €30,000) and around 6,000 firms that also applied but had their application rejected. Using rich micro data from Portugal, the country where the scheme was introduced, firms can be compared over several years both before and after their participation in the training grants scheme.

The results indicate that the scheme had significant positive effects on training take up, both in terms of training hours and expenditure. For instance, training increased by about 50 hours per worker per year in the firms that received the grant, compared to firms that had their applications rejected. Deadweight – funding training that would be carried out even without the funding – appears to be very limited, in contrast to the findings of an earlier study of a programme in the UK (link).

Moreover, the additional training conducted by firms led to a number of important outcomes that the study can trace, including increased sales, value added, employment, productivity, and exports. These effects tend to be of at least 5% and, in some cases, 10% or more.

For instance, the figure below presents the average difference in total sales between firms that received the grant and those that did not. (Periods -9 to -1 refer to the years before the grant was awarded; while period 0, the comparison year, is when the firm applied for the grant; period 1 is when the firm conducted the training; and periods 2 to 10 refer to the years after the training was conducted.)  The results indicate that total sales are 5% higher in the firm in year 2 and 10% higher in year 5. However, there were no differences between firms before the grant was awarded, which is reassuring as to the counterfactual nature of the study. 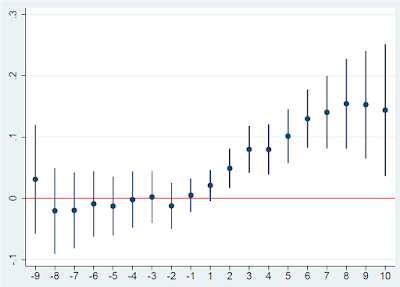 The employment results are also interesting as they come from both fewer separations and increased hirings. Firms that increase their training activities in the context of the grant appear to want to expand their workforce but also to retain the workers they already employ. Moreover, the employment effects are stronger when the scheme ran in periods of recession, suggesting that training grants can also act as an active/passive labour market policy, with a positive ‘lock-in’ impact.

In conclusion, there is a case to be made for workplaces to become a little more similar to universities. On-the-job learning can make firms (much) more productive - but that may require a bigger role from governments. Training grants may be a promising tool in this regard.

Posted by CVER Admin at 11:58
Email ThisBlogThis!Share to TwitterShare to FacebookShare to Pinterest