The past and future of apprenticeship growth in England 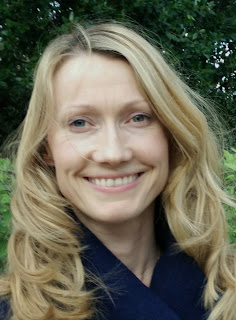 With GCSE results recently out, many students are now facing the decision of whether to do A-levels or whether to opt for different types of further education, for instance an apprenticeship or a college course.  Given the recent efforts of the government to encourage firms to increase the number of apprenticeships for young people, they are set to become an ever more relevant option for those recently out of school. The government has set itself a target of 3 million new apprenticeships over this parliament.

Measures have been taken to help secure the funding of these 3 million new places via a new apprenticeship levy (see a commentary by Hilary Steedman here). How firms will be encouraged to actually create those places is a question that is yet to be answered.

Considering that over the last parliament the coalition government managed to increase apprenticeship starts from on average 221,000 places annually between the academic years 2005/06 and 2009/10 to on average 460,000 places per year between 2010/11 and 2014/15 (the original data can be found here), it is worth looking at how this growth in numbers was achieved and ask what we can learn from the past experience.

Let us first look at the sectors where the new apprenticeships were created. Figure 1 below shows the number of apprenticeship starts per year for 12 sectors. As can be seen in the figure, across all sectors apprenticeship numbers were quite stable between 2002/03 and 2006/07, after which some sectors saw a massive increase in apprenticeship numbers, namely Business, Administration and Law; Health, Public Services and Social Care; Retail and Commercial Enterprise, and Engineering and Manufacturing Technologies. The largest increase in apprenticeship starts occurred in the Business, Administration and Law sector. Between 2005/06 and 2009/10 they constituted on average 53,818 annual apprenticeship starts, and this rose to 138,088 on average over the following five years, an increase by 157%. In the Health and Care sector the growth was even more stunning: From an average of 31,598 starts per year from 2005-2010, the figure rose to 104,706 starts on average between 2010/11 and 2014/2015, which represents a rise by 230%. 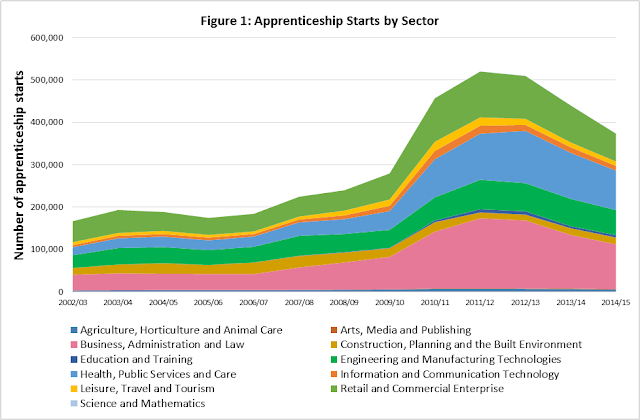 Source: SFA and BIS, Breakdown by geography, equality and diversity and sector subject area: starts 2002/03 to 2014/15. Available for download here.

The massive growth in some sectors raises the question of whether these apprenticeships openings were newly created or whether existing employees were put onto apprenticeship schemes. While we currently cannot verify this conclusively due to data limitations, this BIS survey and this BIS research paper contain evidence that particularly in the Retail, Health and Business sectors apprentices were mainly recruited from the pool of existing employees.

Given the structure of the UK economy, it should however not be surprising that most apprenticeships were created in the service sectors (business, administration and health related jobs), as this is where most employment growth over the past decade occurred. Figure 2 shows the growth in employment numbers between 2002 and 2012 (yellow) and the projected growth (grey) in employment between 2012 and 2022 for 22 different industries. The winners are clearly the health and social work sector, followed by professional and support services and education, both for past and projected employment growth. 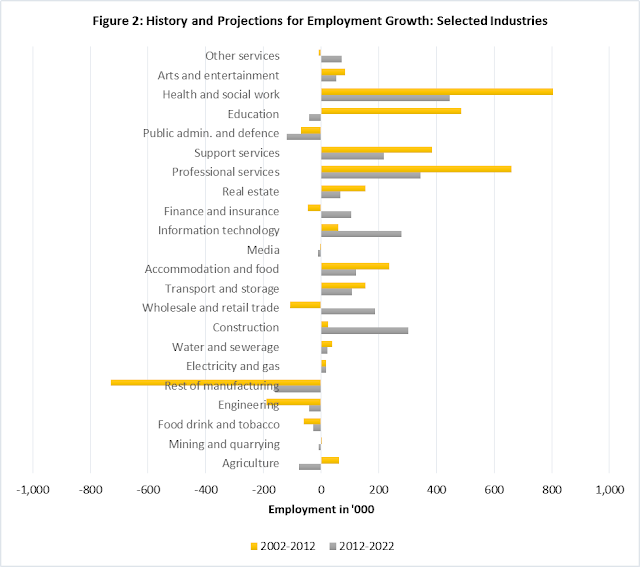 Engineering and manufacturing on the other hand, where many would like to see the bulk of apprenticeship growth, is a sector that has been shedding employment massively between 2002 and 2012, with 920,000 jobs being lost over that period, and a further 201,000 projected to be lost before 2022. Considering these figures it is interesting to observe that apprenticeship growth in this sector has been positive (see the bright green block in Figure 1): it still constitutes 16% of all apprenticeships in England (see Figure 3) today. This probably reflects the fact that the apprenticeship route is a well-established - and possibly the only - way for manufacturing and engineering firms to obtain the intermediate level skills they need (aside from immigration). 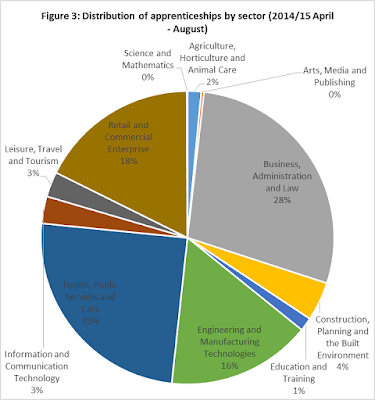 All in all, there is strong evidence that if the 3 million new apprenticeships to be created in the coming five years look like those created in the past five years they will do little to increase opportunities for the young who recently left school. This also means that they will do little to alleviate youth unemployment in England, which is among the highest in Europe (see an earlier blog post on this topic here). 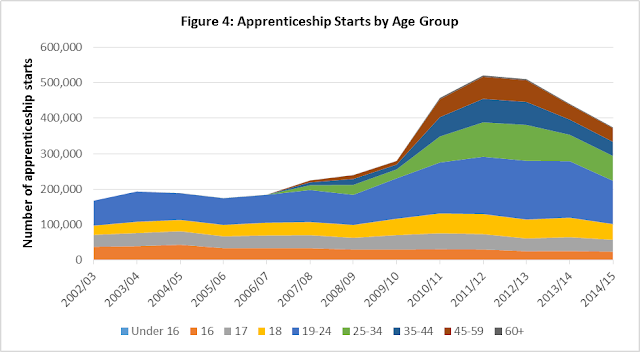 Even if the apprenticeships were mainly undertaken by older and already experienced workers, they may bring some benefits if the training and learning provided increase workers’ skills and productivity. As Figure 5 shows, most of the apprenticeships created since 2009/10 are at level 2, the same level at which passing 5 GCSEs at grades A*-C is classified, or level 3, the same level at which A-levels are classified. 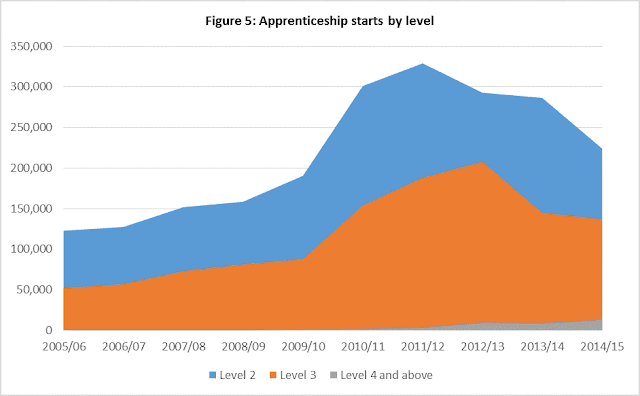 
In order to increase skills and productivity one would think that any training undertaken should be at a higher level than whatever education one already possesses. So if the apprenticeships at level 2 were mainly taken by those with below level 2 qualifications, they may still represent an increase in human capital.

The LFS data doesn't allow us to separate out qualifications obtained through apprenticeship and those held before. So some of the qualifications may have been obtained over the course of the apprenticeship. A preliminary analysis of the further education learner data undertaken by us suggests that often students acquire academic qualifications during an apprenticeship, and this might explain the discrepancy.
Is this pattern a problem? For individuals going through a career change it may not be surprising to see them do an apprenticeship at a lower level than their existing education. But the data suggests that the majority of apprentices are 'overqualified' for the level at which they are studying. This is worrying and calls into question whether individuals are actually adding to their knowledge through apprenticeships. Much more research is needed to better understand the scale and importance of this issue. 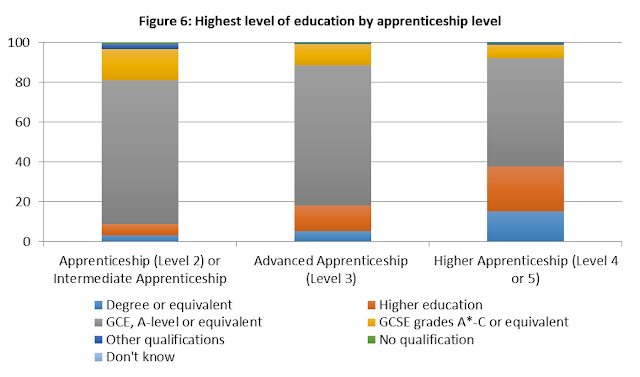 In the light of large amounts of relatively low level (level 2) training, it is worth noting that  the UK  will need more and more highly qualified workers in the future (see this UKCES survey), as jobs are projected to be mainly created in the top three occupational categories – managers, professionals and associate professionals - as Figure 7 shows. Lower level occupations, such as elementary or routine occupations and sales and customer service jobs will represent an ever decreasing share of employment in the future. 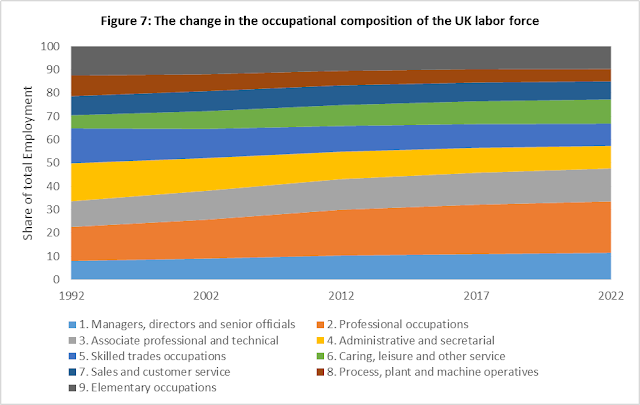 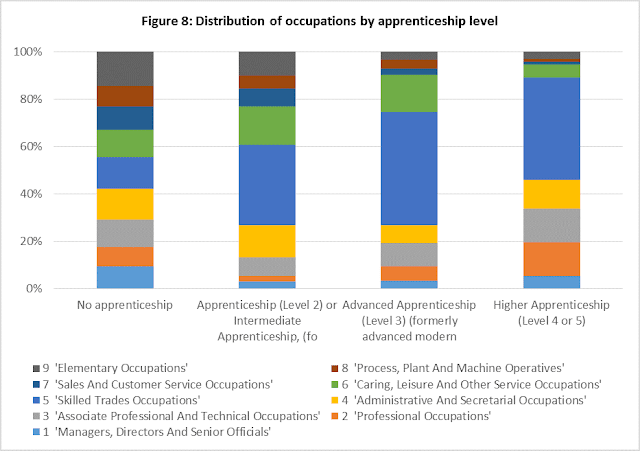 Source: Own calculations based on Labour Force Survey Quarterly Data, January 2012 – January 2015. Sample of those who are currently employed and do not hold a higher education degree.

What next for apprenticeship?

As the figures in this article suggest, the massive growth in apprenticeship may have not benefited those that should be the natural target for apprenticeship – the young who recently left school – but they may still have benefited those who have undertaken them, in terms of the occupations they hold and also in terms of wages, as we have discussed here. However, if the government wants to ensure apprenticeships become
it must ensure that more of the new apprenticeships are at higher levels, and are targeted at the young and provide actual new skills rather than just accreditation of already existing skills among people who already have jobs.