The Benefits of Alternatives to Conventional College: Labor-Market Returns to Proprietary Schooling 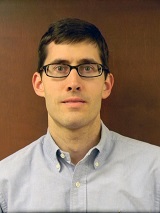 Researchers are increasingly able to estimate the long-term wage returns to education using administrative data. This research reports findings from the US that were presented at the CVER seminar series in 2015 and have recently been published in a discussion paper (Jepsen et al. 2016).


In recent years, U.S. states have drastically reduced funding for education, and public community colleges and universities are particularly hard hit (Phelan, 2014). Proprietary schools (also known as for-profit schools) have been growing dramatically over the last decade, filling a gap in demand for postsecondary education, particularly for low-income and nonwhite individuals. The vast majority of students in this sector pursue vocational qualifications such as certificates and associate’s degrees in areas of study including health, transportation, and trades (i.e. construction, etc.).
Between 2000 and 2012, postsecondary enrollment trebled in proprietary schools and increased by 27 percent in public schools. In 2012 nearly 9 percent of all postsecondary students were attending proprietary schools (U.S. Department of Education, 2013). In response to concerns about false promises to students of future earnings and employment opportunities, states and the federal government have increased oversight of the industry. However, lawmakers have little hard evidence on whether and to what extent these schools improve labor-market outcomes.

We find sizable earnings returns to proprietary school attendance relative to the period more than a year before enrollment. We use this time period for reference because many people enter proprietary schooling due to adverse labor-market events such as layoffs in the year before they enroll. The two figures below illustrate the increase in earnings, measured in log points, relative to the comparison time period mentioned above. The top figure is for men, and the bottom figure is for women. In each figure, the solid line is for students who pursue an associate’s degree, which typically takes approximately two years of full-time study, and the dashed line is for students who pursue a certificate, which is a shorter duration.

Figure 1 – Effect of Attendance on Earnings by Quarter and Program Type, Men 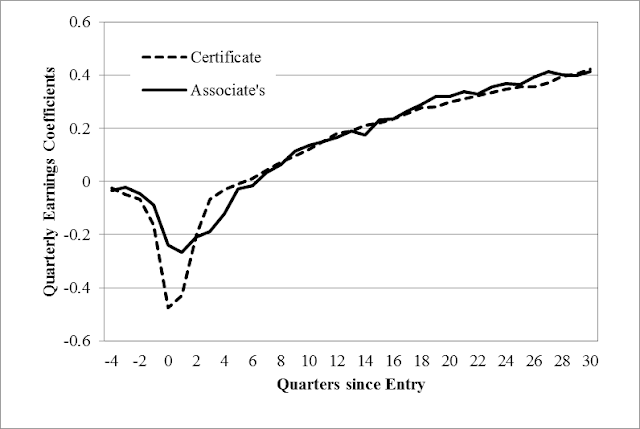 Figure 2 – Effect of Attendance on Earnings by Quarter and Program Type, Women 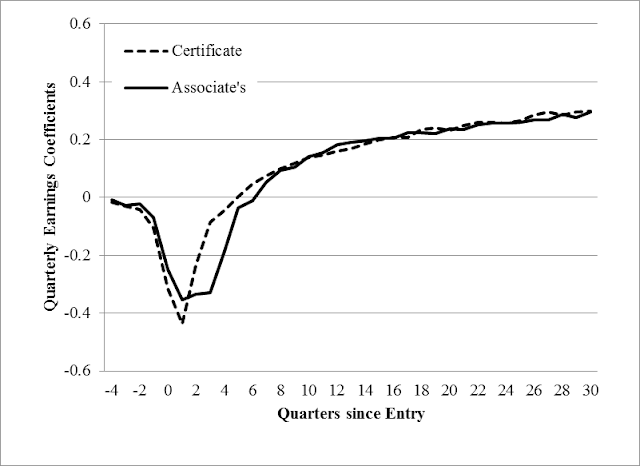 By 5 years after entering proprietary schools, men have higher earnings of 35 to 40 percent (0.30 to 0.35 log points), and women have higher earnings of slightly less than 30 percent (0.23 to 0.26 log points). The increases in earnings are quite similar for associate’s degree programs and certificate programs. We also find a positive relationship between proprietary school attendance and employment, with gains in employment of 5 to 10 percentage points. Even though proprietary schools have much higher tuition than public schools, our findings strongly suggest that the students in our sample have recouped these costs through improvements in earnings and employment.

We also look at how the benefits of proprietary school vary across field of study. The largest increases in earnings are for individuals studying computers, trades, and the “other” category, whereas the earnings increases for health, a field where women are much more likely than men to study, are considerably lower.

A final caveat to bear in mind is that these results are for students entering proprietary schooling in one U.S. state between 2005 and 2009. We have made the underlying assumption in economics that “all else is equal.” This equality assumption would not hold if, for example, there was a large expansion in the proprietary schooling sector, and our results provide little information about labor-market outcomes if a proprietary schooling sector were introduced in another location such as the UK. But they do refute the commonly-held notion that these for-profit institutions charge high tuition and offer little more than high debt in return.

Posted by CVER Admin at 11:52
Email ThisBlogThis!Share to TwitterShare to FacebookShare to Pinterest