Using survey data to estimate the value of vocational qualifications


CVER's Steven McIntosh and Damon Morris, from University of Sheffield, look at the value of vocational qualifications

An important part of the research programme at CVER is to investigate the ‘returns’ to vocational qualifications, that is, the wage premiums earned by individuals who hold such qualifications. The results of such research provide important information to policy-makers about the value the labour market places on qualifications, as well as to individuals making decisions about what courses to pursue. Our work will provide up-to-date evidence on this topic, using a comprehensive range of data sets and methodologies.

The characteristics of those who participate in vocational learning will be different to those of individuals who do not, with these differences often unobserved. Thus, it is very difficult to attribute differences in the wage premia to qualifications alone (when motivation, ability, family background etc. also play a role). The challenge is to use the most appropriate methodology, that produces as fair a comparison as possible. Work within CVER continues in this area, considering a range of data sources, both administrative and survey-based, and methodologies, in order to determine what factors affect the estimated results, and which estimates are likely to be the most accurate.

This blog summarises the findings from the first stage in this research work, estimating the returns to vocational education using survey data. In particular we used Labour Force Survey (LFS) data from the period 1997-2015. The LFS provides detailed information on respondents’ qualifications, allowing us to disaggregate the results by type, level and subject of qualification, as well as by the gender of the learner.

Figure 1: Marginal Returns relative to Vocational Qualifications at Level One 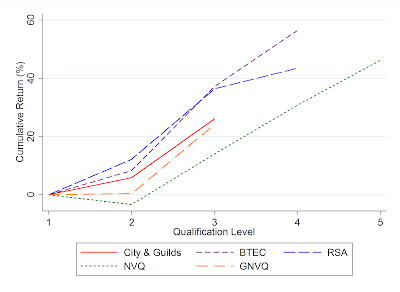 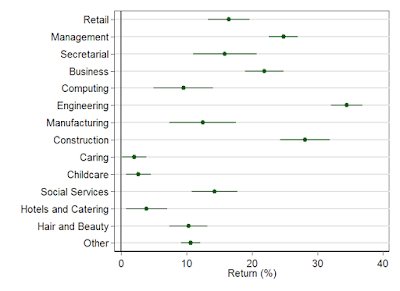 Figure 3: Wage Returns to NVQ3 Qualifications by Subject Area and Sector of Work 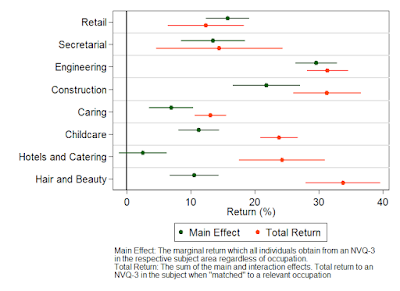 Posted by CVER Admin at 10:46
Email ThisBlogThis!Share to TwitterShare to FacebookShare to Pinterest