The benefits of intermediate level skills 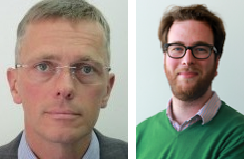 Using findings from a study of all countries of the European Union, CVER's Vahé Nafilyan and Dr Stefan Speckesser look at new evidence on the economic and social cost of low skills


A new major study by the European Centre for the Development of Vocational Training (Cedefop) seeks to provide evidence for policy-makers on the economic and social cost of low skills in the EU. The authors [1] of this blog were part of the team which estimated the costs (and/or foregone benefits) of low skills to individuals, businesses, the economy and society at large.
Using data for all countries of the European Union and building on findings from existing literature, this study aimed to provide a robust evidence base in relation to low-skilled adults in Europe. It derived estimates of the individual and social (monetary) value of the benefits of a faster increase of the level of skills in Member States as compared to the current trend.

At the core of this analysis were estimates of wage returns that individuals can obtain through investing in intermediate skills. Using data from the 2011 European Union Statistics on Income and Living Conditions (EU-SILC), we estimated the difference in earnings between individuals who achieved upper secondary education (i.e. have a qualification of Level 3 of the International Standard Classification of Education, ISCED 3) and those with lower level qualifications (i.e. have an ISCED Level 2 or lower qualification). We used regressions to account for other important factors that influence both educational achievement and earnings in adulthood[2]. 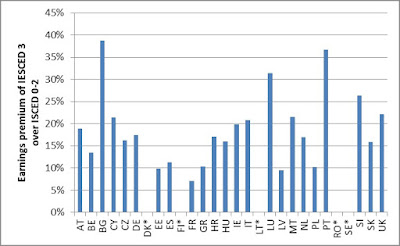 * Not statistically significantly different from zero

The research also examined how intermediate education attainment is associated with a range of individual and social outcomes. In particular, it highlights the strong association between educational attainment and health.

While a rigorous causal analysis of health benefits of education was not possible because of the lack of suitable data, our study included estimates of the associations between education and health. Using data from EU-SILC data, we compared a number of health outcomes for the low-skilled (ISCED 0-2) and the group with marginally higher skills (ISCED 3). Figures 2 and 3 show differences in important health indicators between intermediate and low skilled adults as percentage point differences for

a) good or very good health;

b) long-lasting/chronic illness or condition;

c) limitation in activities because of health problems;


Figure 2 shows the differences in the proportion (in percentage points) who report that their health is either good or very good between intermediate and low skilled adults. In most countries adults with intermediate skills show better health outcomes. 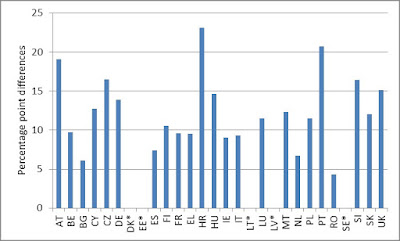 * Not statistically significantly different from zero

Figure 3 shows further differences in incidence of long lasting or chronic illness and limitations in activities because of health problems. For these outcomes, there is a wide cross-country variation, partly due to structural differences in the different countries (age structure, quality of the health care system, expectations towards health and tolerance of illness). However, the graph shows again statistically significant differences in most countries. 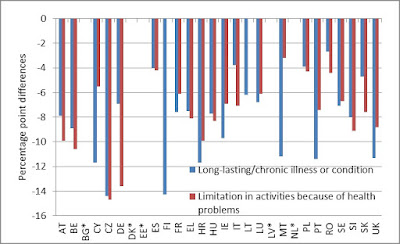 * Not statistically significantly different from zero
Source: Cedefop on EU-SILC 2011

These differences in outcomes are particularly apparent when contextualised to the proportions of people responding at different skills levels. For example, the incidence of chronic/long-lasting illness is twice as high among the low-skilled than those with upper secondary education in Croatia and Malta. In Malta for example, 20.8% of low-skilled adults report suffering from long-lasting health problems, compared to 9.6% of those with upper secondary education, a difference of 11.2 percentage points. Relative differences over 60% are observed in Greece, the Czech Republic, Portugal, Ireland and Belgium. Similar results can be observed for the other variables considered in the questionnaire.


Towards a more comprehensive understanding of social returns to education investment
In recent years, an evidence base on the social benefits of intermediate level skills has emerged in the UK, which – similar to the Cedefop study – provides a valuation of net earnings returns of skills investment to the individual. In this literature, social net benefits are usually derived by upscaling benefits resulting from higher productivity as evidenced in wage returns by factoring in an additional employer return from higher level skills.

However, the description of differences in health outcomes between people with low and intermediate level skills and findings from the literature on the crime-reducing effect of education and further positive effects on communities suggest that focusing solely on measures of earnings and productivity are likely to underestimate the social benefits of investing into skills.

For the UK (and most other countries), building a better data infrastructure to estimate the magnitude of such further returns to education would help to improve our understanding of the social benefits of education.


* * *
[1] The views expressed in the paper are solely the authors’ and do not necessarily represent those of Cedefop.

[2] We include parental background variables of individuals to reduce sources of bias in a two-step Heckman selection model, including a number of further observable characteristics affecting labour supply, such as gender, age, marital status, whether there are any children under the age of 18 in the household, the use of paid childcare and childcare by relatives and the spouse’s employment status and level of education, characteristics about the parental education background, and household characteristics.
Posted by CVER Admin at 16:36
Email ThisBlogThis!Share to TwitterShare to FacebookShare to Pinterest