What are the labour market outcomes associated with vocational education and training?

Pietro Patrignani is a Senior Economic Consultant at London Economics working on CVER projects. In this blog he looks at the outcomes for those on vocational paths using newly matched data.

The study [1] has focused on the cohorts undertaking Key Stage 4 schooling in 2001/02, 2002/03 and 2003/04 (aged 15 at the start of each respective academic year) and assessed the association of vocational attainment with labour market outcomes at age 26 (tax years 2012/13 to 2014/15). To undertake the analysis, on one side, the different educational datasets were combined to generate the highest qualification (vocational or academic) attained by each learner by the age of 22. On the outcomes side, the various components of labour market data were cleaned and recoded to generate measures of daily earnings, the proportion of the year spent in employment and the proportion of the year spent in receipt of active labour market benefits.

With more than 1.44 million observations, the analysis was undertaken for men and women separately – and a number of different model specifications were estimated. The results presented here illustrate the differential in labour market outcomes to each vocational qualification at Level 4 and below within the Regulated Qualifications Framework compared to the next highest level of qualification.

At this stage, there is limited comparability with traditional analyses using the Labour Force Survey, as the group of individuals covered by the matched LEO dataset is much younger on average and we report findings for daily earnings (as we don’t have information on hours worked and hourly wages). This means that people with higher qualifications might choose to work for longer hours and this would be captured in the estimates (although this employability effect would be partially taken into account as we look at daily rather than yearly earnings). A CVER research paper by Sheffield University and London Economics (forthcoming) looks in greater detail at the comparison across the two data sources. 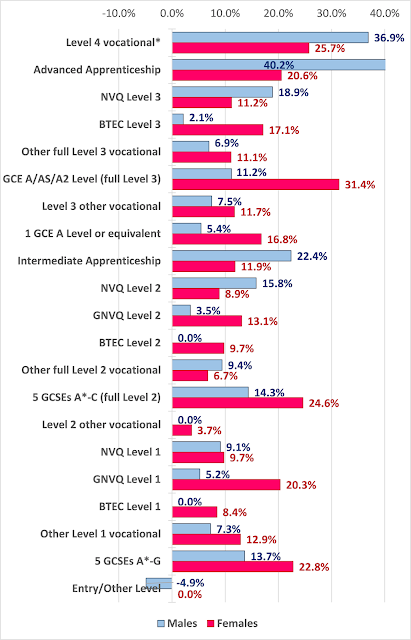