Do older apprentices get the same earnings boost as younger ones?

To answer this question, we analyse administrative data recording all apprenticeship starts in England between 2004 and 2013. These data are matched to tax records containing information on annual earnings, from which a measure of daily earnings can be derived.

We divide the observed apprentices into two age groups; those aged 19-24 and those aged 25 and over (apprentices below the age of 19 typically do not have prior earnings information with which to perform the analysis and so are excluded). Figure 1 shows the average earnings in each year for those who undertook an Intermediate (Level 2) Apprenticeship, separately by age group. ‘Year 0’ in these charts represents when the apprenticeship was actually undertaken. 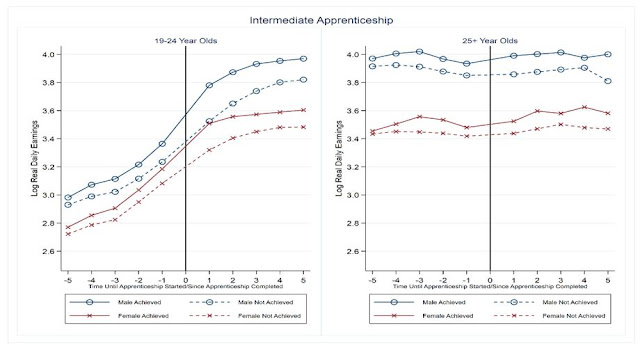 Figure 2 shows similar earnings profiles to Figure 1, but this time for Advanced (Level 3) Apprenticeships. We observe very similar patterns. For both age groups and for both genders, we can see a widening of the earnings gap between completers and non-completers after the apprenticeship, demonstrating the value of these apprenticeships in the labour market. 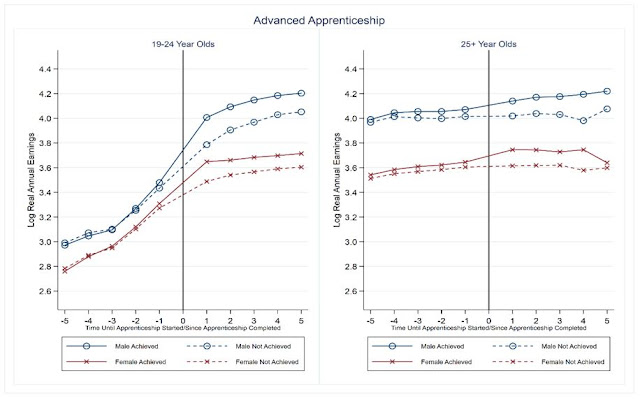 Using regression analysis, we can quantify by how much more earnings increase for the treated apprenticeship completers than for the control group of non-completers, while holding constant other factors that could influence earnings, such as age on completion of the apprenticeship, ethnicity and duration of apprenticeship. The results are consistent with the impression given in Figures 1 and 2. For both men and women and at both apprenticeship levels, there is a positive boost to earnings, with the effect of completing an apprenticeship on earnings being two to three times larger for the 19-24 age group than for the older group.

There is a clear difference in these proportions across frameworks. Those to the left-hand side of the diagram (Automotive, Construction, Electro-technical, Plumbing, Hair and Beauty, and Engineering) are dominated by younger apprentices. At the other end are frameworks where the majority of apprentices are aged 25 and older, such as Business Administration, and Health and Social Care.

Next, looking within sectors, we find that for men at Level 2, and for women at both levels, there are a number of sectors where apprentices in the younger age group receive a higher earnings differential than older apprentices in the same sector. This seems to be particularly the case in non-manual business service sectors such as Business Administration, Accountancy, and IT.

While older apprentices may not want to move into such sectors at this stage of their careers, for the skill needs of the economy it is important that overall there are sufficient opportunities available in such higher value sectors, and that the apprenticeship scheme does not become dominated by older apprentices in the lower value frameworks.

Posted by CVER Admin at 09:30
Email ThisBlogThis!Share to TwitterShare to FacebookShare to Pinterest