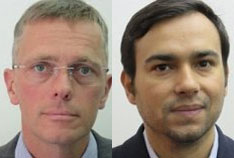 A detailed picture of earnings effects of university degrees is emerging, but not much is known about the benefits of higher vocational education


A recent report by the IFS provides evidence on the extensive earnings benefits for people graduating from university in England: At age 29, the average male university graduate earns 25% more than someone with similar background characteristics who did not go to university. For women, the earnings effect was found to be even higher, more than 50%. However, the report also found that some graduates, in particular male students achieving degrees in creative arts, English or philosophy, had lower earnings compared to similar A-Level students, who did not go to university.

Although there are clearly many more benefits from university studies than a “graduate wage premium”, adequate earnings benefits should result from achieving a degree in the presence of high costs and related individual debt. With life-course earnings remaining low for some graduates, not all debt will be repaid, which results in additional government spending due to loan write-offs. Higher vocational education offers an alternative choice of programmes of shorter duration, often offered by local colleges and resulting in lower debt (or if e.g. within an employer-funded apprenticeship no debt at all).

In a new CVER study making use of linked data of hundreds of thousands English secondary school leavers, the National Institute of Economic and Social Research has now published the first ever comprehensive study, showing how many young people choose vocational education and how their earnings contrast with those of degree holders. It finds that earnings of degree holders in many subject areas are consistently higher by age 30 than those of people with higher vocational qualifications. However, we also find that people achieving Level 4-5 qualifications in STEM (Science, Technology, Engineering and Mathematics) subjects earn more than people with degrees from most universities, similar to earnings of graduates from prestigious Russell Group universities. 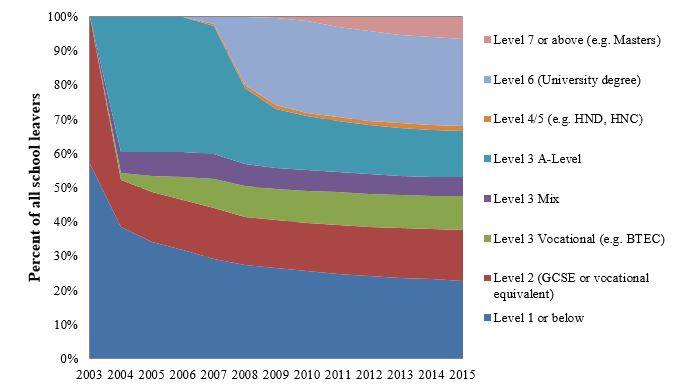 When looking into the highest level of qualification people had before achieving degrees or higher vocational education, we found a number of differences: The majority of young people achieving a degree previously had A-levels (about 77%), some had Level 3 vocational qualifications (about 5.4%) or some combination of both (6.6%). In contrast, relatively more people starting higher vocational education held Level 3 vocational qualifications previously (34% of the Level 4 and 35% of Level 5 achievers). More than a quarter (30%) of all Level 4 achievers had even no previous Level 3 qualification, which is normally associated with entry into tertiary education.

Looking into their subject choices (Figure 2), higher vocational qualifications show a very unbalanced gender composition, with science/technology/engineering and maths (STEM) and construction subjects taken overwhelmingly by male students, and health, education and other subject mainly by female students. Only in business studies and Arts, Languages and Humanities show a less unbalanced pattern, much closer to the composition of degree students by gender.

Figure 2: Share of females in Level 4-6 qualifications by subject

How do earnings compare?

With newly available Longitudinal Education Outcomes (LEO) data for England, we can describe annual earnings of people having made particular education choices until the age of 30 based on the earliest available cohort of students leaving secondary school in the summer of 2003. We will be developing the analysis further in a future study with colleagues at the Institute for Fiscal Studies and University of Cambridge.

Figure 3 shows the descriptive association between average earnings and qualification type. It depicts an early advantage (in monetary terms) of a vocational education compared to academic education, although this converges over time as more people with academic education enter the labour market and get work experience. The earnings path can be understood essentially as a trade-off between work experience and education investments. In this scenario, it is worth noting that only after a few years, the lines depicting earnings trajectories, intersect. The average earnings growth for those who attended Russell group institutions is particularly striking. For men, average earnings for vocational and academic (non-Russell group) graduates converge by the age of 30 whereas for women, earnings of the former group increase at a faster rate. The gender differences largely reflect different subject choices made by men and women, which we discussed below.

Figure 3: Earnings Trajectories*, by type of qualification during the period 2004-2017 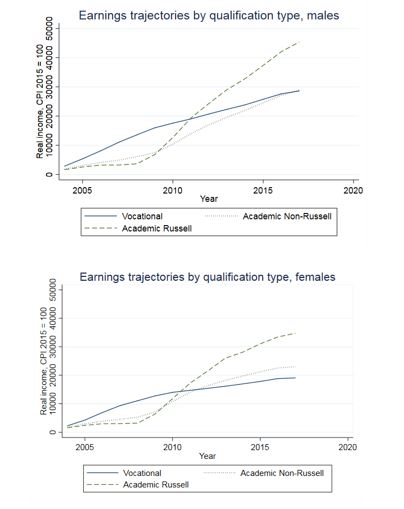 * in £ at 2015 price levels (CPI adjustment), academic qualifications by Russell/Non-Russell

Figure 4 further explores median annual earnings by age 30 for people with specific subject choices and whether their education was at degree level (Level 6 from a Russell or Non-Russell university) or for higher vocational qualifications (Levels 4 or 5), with a remarkable outcome. From a descriptive point of view, we find that by the age of 30, those achieving higher vocational qualifications in STEM subjects are observed to earn above some degree holders[2]. This finding remains consistent when using more sophisticated statistical techniques.
Figure 4: Median annual earnings* at age 30, KS4 cohort of 2002/03

An alternative to degrees?
In an additional multivariate analysis, we control for secondary school performance, work experience and a number of further characteristics, but earnings differentials remain similar to the descriptives. Hence, there is some confirmation that higher vocational education in STEM subjects offer substantial benefits by age 30, in line with earlier studies[3]. While for many subject areas, earnings of degree holders are consistently higher by age 30 than for those with highest attainment at Level 4 or 5, higher vocational qualifications could be a useful alternative for people aiming for technical qualifications. With many higher apprenticeships involving some form of tertiary education below degree level funded by employers and lower costs due to shorter programmes and/or local provision by further education colleges, higher vocational education could indeed be a useful alternative to university to for professional roles.

[1] In the context that some are still progressing at that age.
[2]This also applies to Construction. However, few people obtained these Level 4-5 qualifications.
[3] Hanushek, E., Schwerdt, G., Woessman, L. and Zhang, L. (2017). General Education, Vocational Education, and Labour market Outcomes over the Life-Cycle. Journal of Human Resources
Brunello, G., and Rocco, L. (2017). The labour market effects of academic and vocational education over the life cycle: Evidence from two British cohorts. Journal of Human Capital


Posted by CVER Admin at 00:01
Email ThisBlogThis!Share to TwitterShare to FacebookShare to Pinterest